Maxent, which stands for maximum entropy modelling, predicts species occurrences by finding the distribution that is most spread out or closest to uniform, while the limits of the environmental variables of known locations.

Maxent only uses presence data. The algorithm compares the locations of where a species has been found to environmental data available in the study region. It defines these available environments by sampling a large number of points throughout the study area, referred to as background points. Background points can include locations where the species is known to occur and define the available environment. Background points are not the same as pseudo-absence points. Pseudo-absence locations can be where a species is suspected not to occur, for example in locations where species with similar habitat requirements were detected, but the target species was not. Pseudo-absence locations may also be random locations where the target species was not detected in the available dataset, i.e. random, disk, and SRE options in the EcoCommons modeling wizard. Background points are locations that are meant to be numerous enough (the default is 10,000 points) to capture the full environmental space of the study area. The Maxent algorithm developed for species distribution modelling is a machine learning method and thus iteratively builds multiple models. It has two main components:

Maxent considers six types of features, each of which allows a different possible shape of the response curves, and has different implications for the constraints (Figure 1). As a default, Maxent uses all feature types, but you can choose to build simpler models by only using a few of these. 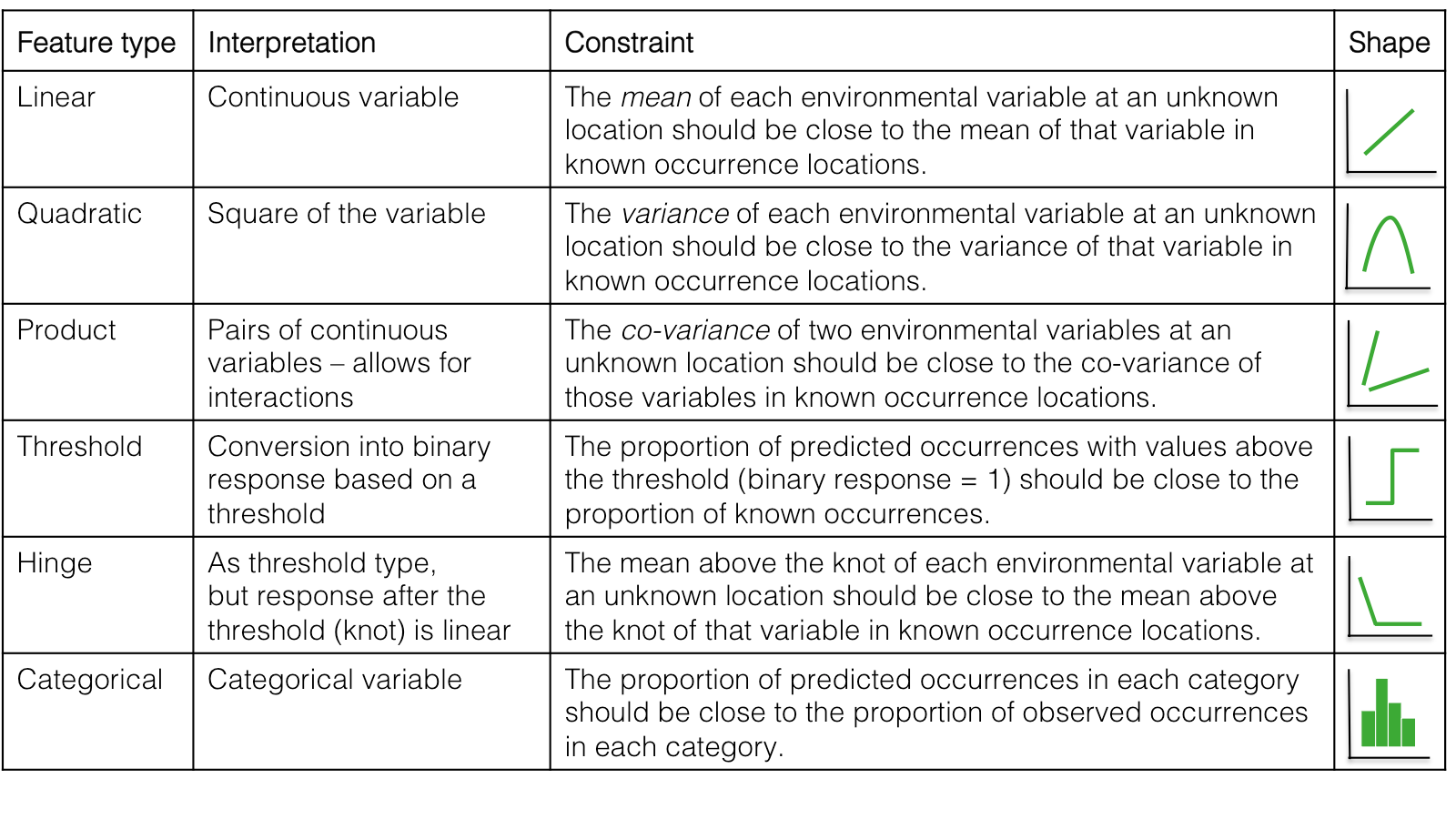 Figure 1. Description of the kinds of feature types that are used to define constraints. The default is to try. All feature types when building a model unless sample size is insufficient for some types, in which case those types are by default excluded. 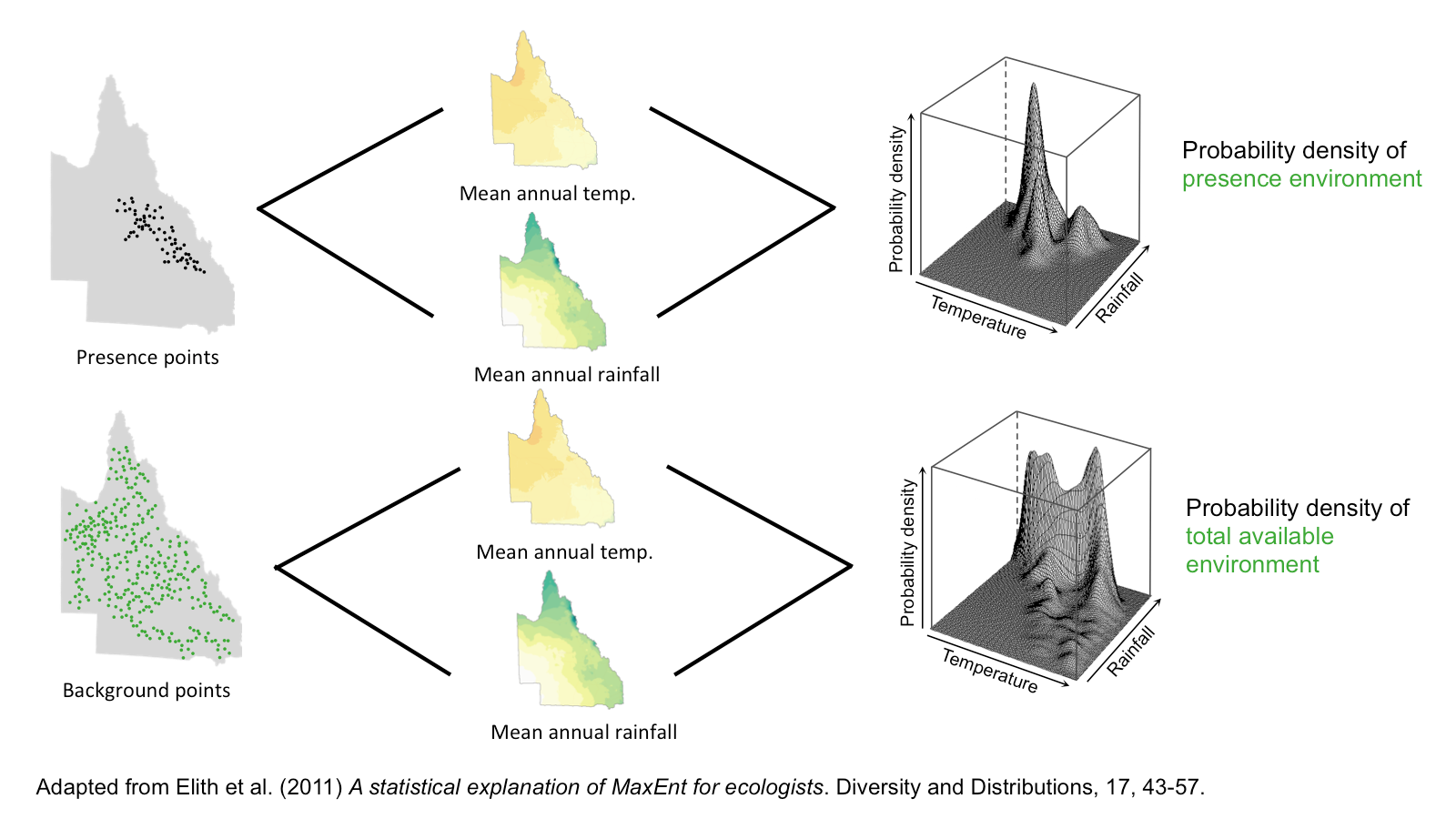 Figure 2. Depiction of how Maxent defines the probability density functions for both presence locations and background points.

Maxent chooses the distribution that maximizes the similarity between the environmental characteristics of the total environment and those of the locations where the species is known to be present. This is known as the raw output of Maxent. For a more straightforward interpretation of the results, and to provide an estimate of the probability that a species is present at a given location, Maxent performs a logistic transformation of the raw output. The logistic output takes into account the prevalence of a species, which refers to the proportion of occupied locations. Maxent uses a default prevalence value of 0.5, which implies that the species is present in half of all the possible locations. We advise caution with this default value as the exact prevalence cannot be derived from presence-only data. The default value of 0.5 is for example not appropriate for rare species.

An important aspect of Maxent is regularization, which reduces the overfitting of the model. Regularization is done in two ways:

3. Relaxing the constraints: instead of fitting the model using the exact constraints (means, variances etc.) of the environmental variables, it takes into account confidence intervals around the constraints. This prevents the model from being fitted too closely around the input data.
4. Penalizing complexity: the model excludes feature types that do not add a significant improvement to the model.

Maxent by default assumes that prevalence is 0.5, which is not always appropriate.

Maxent needs to run more than once to check results

Scientific publications using Maxent models require authors to validate their results.  The best way to validate results is to see how well the model predicts the locations of independent data  not used to create the model being evaluated (Phillips and Dudik 2008, Radosavljevic and Anderson 2013). If using ALA data, you might be able to identify a source of data that was collected using a different methodology, then make sure those data are not used to train the model but are used to test the model. A growing number of datasets, such as tracking data, ecoacoustic data, or camera trap data, are other good sources of independent data that can be used for validation. An example of evaluation statistics from independent data is available in step 4of the SDMs in R module.

If independent data are unavailable for validation, one of three options should be employed.

Maxent, like all machine learning algorithms, uses stochastic learning to generate a model. This means  there is a random process in the modelling, so subsequent runs of a machine learning algorithm often produce slightly different results depending on the random number used to start these processes. If there are strong relationships in the underlying data, the differences in results from one run to the next will be relatively small. However, it is possible to get substantial differences in results from a machine learning algorithm like Maxent even when using exactly the same data and model arguments in subsequent runs. If teaching or sharing results where you want others to generate the same result, it is important to set the same number of seed.. All of the validation methods above capture the variation in results related to using different subsets of data. If you want to include the error associated with the stochastic learning process, you need to set the model argument “”.

Examples of ways to generate bias layers or targeted background data can be found in modules 1 & 3 of the SDM in R modules. Selecting background points within a range of distances around the presence locations is also an effective way to reduce bias (Barber et al. 2022). Be careful to select enough background grid-cells (10,000 +) within the specified distance range from presence locations.

When there are many presence locations in a dataset, and those locations are clustered, thinning records in geographic space based on a measure of spatial autocorrelation can also significantly improve predictions (Kramer‐Schadt et al. 2013, Lissovsky et al. 2021).