With the increasing development of information technology, the amount of data in the world has been exploding. On top of that, there has been a large movement towards open data, suggesting data should be freely available to everyone to use and republish. That means there is a lot of computing infrastructure and data available, which makes it easier to build and run species distribution models. This article will cover:

To run a species distribution model, you need two types of data: species data, which are the coordinates of the locations where the species of interest occurs, and environmental data, that describe the environmental conditions of those locations.

Data about where species have been observed are collected and stored by many different providers. You can either go out in the field and collect this data yourself, or use data previously collected by others. Data collections can come from museum records, large research surveys, or citizen science initiatives such as annual bird counts. There are an increasing number of resources online where such data is collated, and where you can visualise or download an occurrence dataset of a particular species. In Australia for example, there is the Atlas of Living Australia (ALA), which has over 10,000 datasets with occurrence records for more than 100,000 species. At a global level, the Global Biodiversity Information Facility (GBIF), is a valuable resource with free and open access to occurrence records of more than 1.5 million species. You can get marine data form the Observation Biodiversity Information System (OBIS), which  has data for over 150,000 species. If the project you are working on is more focused on a particular taxa or group of species, there are a variety of resources such as: the Australian Data Discovery Portal of the Terrestrial Ecosystem Research Network (TERN), Track, which has data about Australian fish distributions, NatureServe Explorer with information about >70,000 plants, animals, and ecosystems of the United States and Canada, or the Catalogue of Life.

In EcoCommons, you can import occurrence data directly from ALA, GBIF and OBIS, and also species trait data from AEKOS.

Please be aware that the outcome of a model is only as good as the data you put into it, or as they say: "Garbage in, Garbage out" and therefore checking your species data before you build your model is recommended. A few things to check in your data:

Environmental data describes the conditions of the locations where a species is present or absent. The most common types of environmental variables that are used in species distribution modelling are described by four classes of physical conditions, called the primary environmental regimes: moisture, thermal, radiation, and mineral nutrients. The moisture regime is mostly described by measures of rainfall and evaporation, the thermal regime by temperature measures. The radiation regime refers to solar radiation or sunlight, which is usually measured by the photosynthetically active radiation, or PAR. This is the spectral range of solar radiation that photosynthesising organisms, such as plants and algae, are able to use in the process of photosynthesis. This spectral region corresponds more or less with the range of light that is visible to the human eye. The mineral nutrients regime is described by factors such as soil type.

For species living in the ocean instead of on land there are oceanic variables such as sea surface temperature and salinity that can be used in species distribution models.

As with species data, there are a lot of online resources available that provide environmental data. For example, WorldClim provides a large collection of global climate layers of past, current and future climate. There is also a global soil database, and again there are also smaller scale national or regional databases. When you are designing a species distribution model, it is important to first think which environmental variables are likely to influence that species and then search for relevant environmental datasets. On EcoCommons, we provide access to >7000 current and future climate layers and >300 layers of non-climate environmental variables. You can have a look at these datasets without logging in.

It is good to be aware of how environmental data is generated. The data that is available on EcoCommons or other data collections is usually not the raw data collected. Raw data would be measurements such as daily rainfall or temperature. In Australia, there are 10,000 stations around the country that measure the amount of rainfall over 24 hours each morning at 9 am. There are also 1500 stations that continuously measure temperature, and report the maximum and minimum temperature over 24 hours each morning at 9 am. 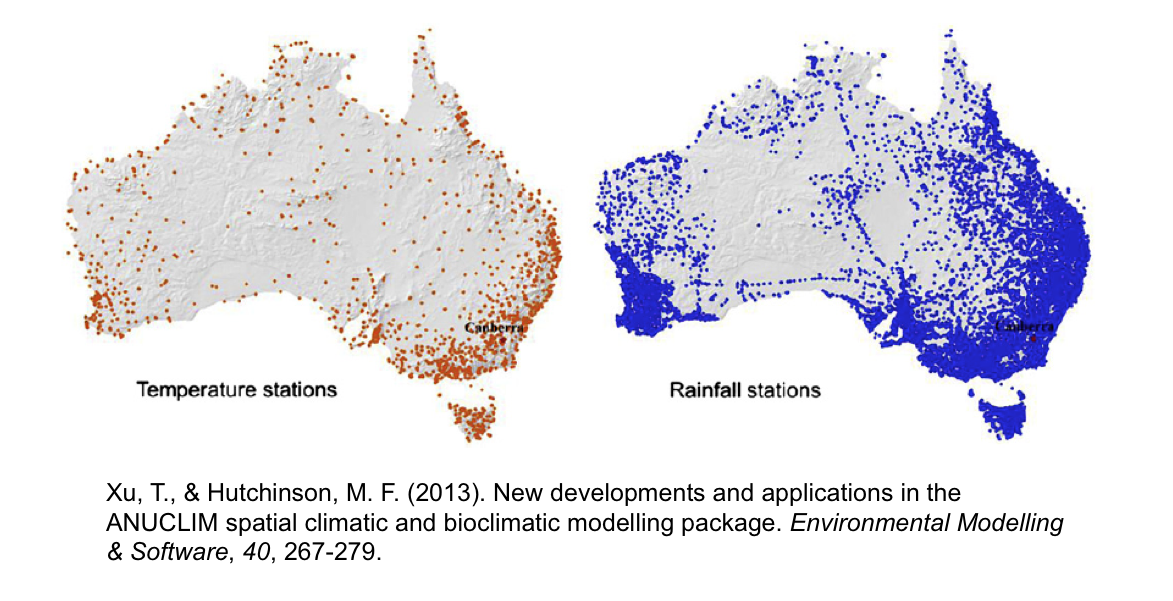 The raw data is not very useful for a species distribution model as daily measurements are highly variable, and species respond to environmental conditions not so much on a daily basis but rather over longer time scales. Therefore, these raw data are processed to generate summary statistics, which are variables such as the mean annual temperature or the minimum or maximum of the warmest or coldest, the wettest or the driest month or season. Such minimum or maximum values make much more sense in species distribution modelling as the probability of a species occurring in a particular place is often influenced by a threshold of an environmental factor. For example, if a species cannot tolerate temperatures above or below a certain threshold, variables that represent minimum or maximum values are very useful to describe the environmental conditions under which a species is able to survive.

Like species occurrence data, environmental data is only collected in particular locations where measuring stations are situated. To use this data in a model, it needs to be converted to create what is known as a ‘raster surface’ in which each cell has a value for a particular environmental factor, including the cells for which no measurements of environmental factors exist. Because we don’t know the exact value for each cell, we use a technique called spatial interpolation that predicts values for unknown cells from a limited number of sample data points around that cell. This interpolation is based on the assumption that cells that are close together tend to have similar characteristics. 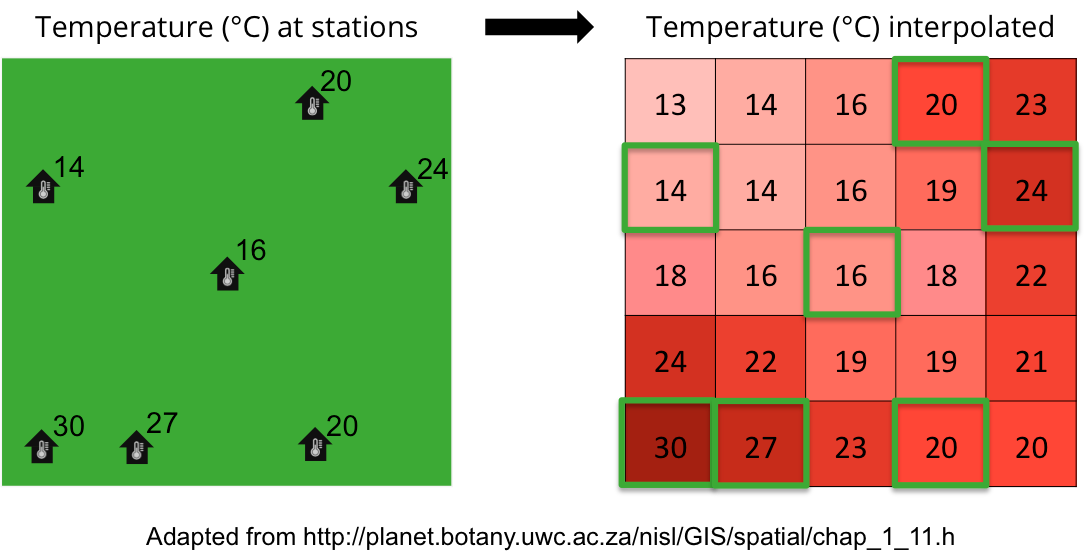 The resulting surface can be visually displayed in a two-dimensional graph, which is a contour graph or in a three-dimensional graph in which the x and y axes represent the longitude and latitude and the z-axis the value of the environmental factor measured.

Another important aspect of both species and environmental data is scale. Spatial scale has two components: grain, which is the resolution of your data and extent, which is the total study area. In the figure below, grain or resolution is the size of one individual grid cell, and refers to the sample resolution of a single observation. In other words, at what scale is occurrence data of a particular species or measurements of a particular environmental factor collected? For example, habitat type can be defined in grid cells of 1 km² or 10 km², which we refer to as fine versus coarse resolution. Extent refers to the total geographic area of a study.

It is important to think about resolution when environmental datasets are selected for your species distribution model. Ideally, you would choose the resolution of the dataset at a scale that is relevant to the species. For example, the appropriate resolution of a temperature dataset that is used to model the distribution of a plant species, which always remains in the same place, is different compared to one that models the distribution of a species with a daily home range of 20 or 30 km, such as large birds. Environmental variables from different regimes in models, such as temperature and soil, will likely have different resolutions among the datasets as climate data is often available at resolutions of 1 or 5 km², whereas soil datasets have a much finer resolution such as <100 m².

We encourage you to go and explore all the different datasets that are available and use them in your models, but just be aware that: