How species are affected by a changing climate

Survival of a species can be directly affected when the environment changes in such a way that the conditions reach beyond the tolerances of a species. For example, an increase in temperature can limit the survival of species that are not able to withstand warmer temperatures. But there can also be indirect effects of a changing environment, even if a species is able to survive in the new conditions. For example, a warmer and drier climate can change the vegetation in areas, which might reduce essential food sources for a species. There are several ways in which species can respond to climate change:

Species distribution models mostly come into play to study the two latter responses: the potential of species moving to new areas, or the decline in suitable habitats leading to the extinction of species.

How do we combine species distribution models with climate change projections?

A Climate Change projection is a so-called secondary experiment and uses the outcome of a species distribution model as input.

Step 1: Run a Species Distribution Model with your selected species data and environmental data, using one or more algorithms. The result is a predicted probability of occurrence current climate conditions.

Step 2: Run a Climate Change experiment, which projects the outcome of the SDM with future climate datasets to obtain a prediction of where your species could occur in the future under a particular climate change scenario.

Keep in mind that the climate change projection uses the relationship between species occurrences and climatic variables as modeled under current climate conditions, and thus assumes that this relationship remains the same in the future which might or might not be true. 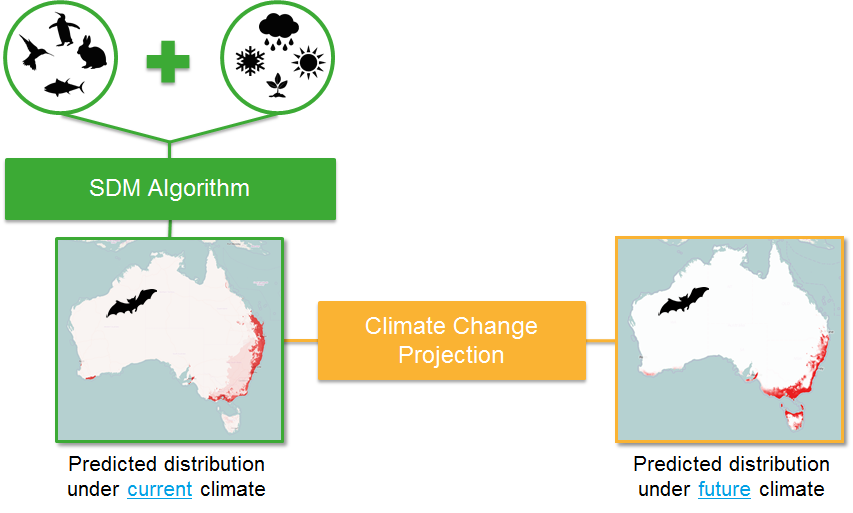 Across the world, there are thousands of recording stations that measure daily temperature and rainfall. 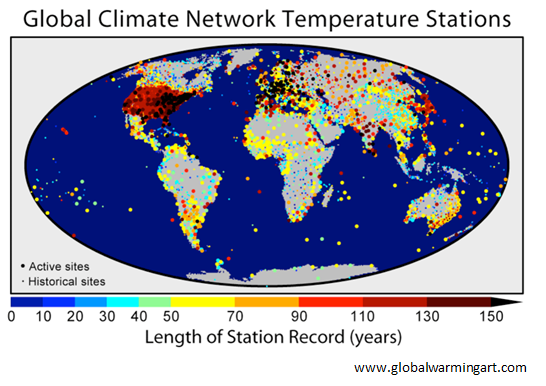 Through these measurements we have a pretty good understanding of how climate has changed over time. But how do we know how these trends are going to continue in years that are yet to come? Based on the knowledge that we have about physical and chemical processes, and interactions between the atmosphere, the biosphere, the land and the oceans, scientists have built models that represent the earth’s climate system as shown in this diagram. 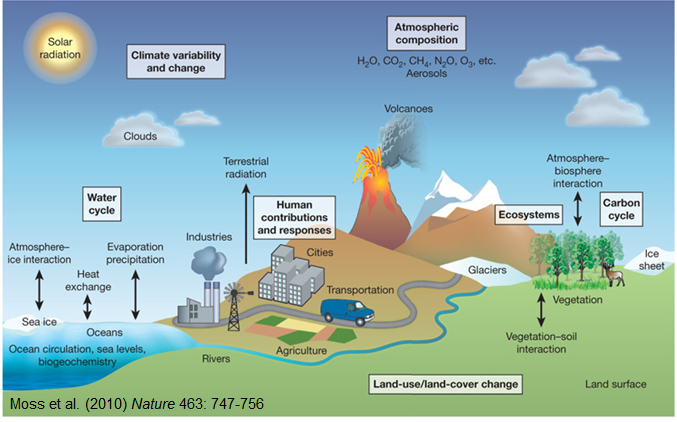 These models include natural processes, such as the radiation that the earth receives from the sun, but also human impacts such as the emission of anthropogenic greenhouse gases. By simulating different scenarios, for example with different concentrations of carbon-dioxide emitted by human activities, we can predict how our climate is going to change, and estimate future values for variables such as temperature, rainfall and sea levels across a range of possible trajectories, some of which are more likely than others.

In 1988, the IPCC, the Intergovernmental Panel on Climate Change, was established to assess scientific information about the risk and impacts of human-induced climate change. The IPCC is advised by thousands of scientists and experts and so far has published five assessment reports. In 2000, they published a Special Report on Emission Scenarios, commonly called the SRES scenarios. These scenarios assume that no efforts are made to limit greenhouse gas emissions, and they were used in the third and fourth assessment report. In 2010, a new method for predicting different scenarios was published, and the new scenarios, the Representative Concentration Pathways or RCPs, were adopted by the IPCC in their fifth assessment report. I will explain the RCPs in a bit more detail.

There are four different RCP scenarios: RCP 2.6, 4.5, 6 and 8.5. The numbers refer to radiative forcing measured in watts per square meter by the year 2100. This represents the global energy balance, measured as the difference between the amount of energy from the sun that the earth absorbs and the energy that is radiated back to space. If there is more energy absorbed than radiated back to space, the earth will be warming. 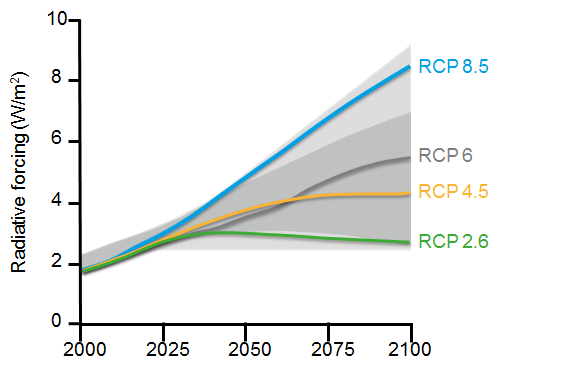 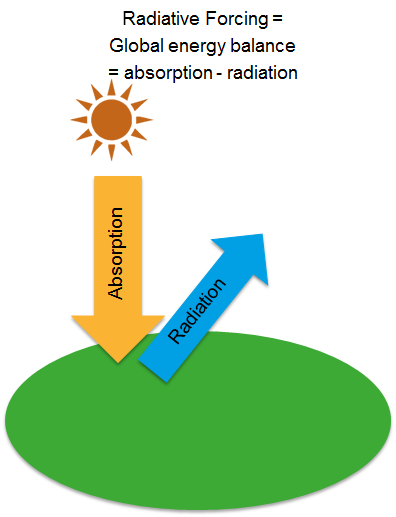 Each RCP defines a specific trajectory with projected outcomes in the year 2100 for how much the planet has heated up, and the concentration of greenhouse gases. So, how are these particular predictions calculated?

The graph below shows the emission of carbon in Gigaton per year. The earth currently emits around 10 Gigaton per year. The most negative pathway, RCP 8.5, predicts emissions three times as much as our current emissions by the year 2100. RCP 6 shows an increase in emissions for the next 60 to 70 years followed by a decline. RCP 4.5 shows a shorter period of increase before the decline, and the most positive pathway, RCP 2.6, shows a decline starting very soon. These predictions just illustrate possible pathways, and are an indication for what might happen depending on the actions that humans take to reduce carbon emissions. 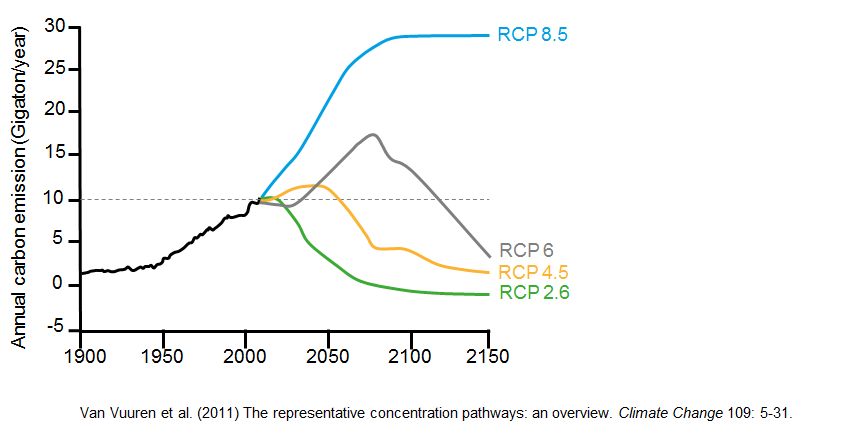 The pathways are based on assumptions about a range of factors that affect the earth’s climate system, such as economic activity, the use of energy sources, population growth and other socio-economic factors. To highlight a few of these factors, for population growth, it is clear that an ongoing increase in the number of people on the planet will lead to the most negative pathway, RCP 8.5, while the other pathways depict a more stabilizing world population. If we look at the different types of energy that we will primarily use, all pathways expect a significant increase in energy use, but to follow pathway 2.6, 4.5 or 6 we need to increase our use of bio-energy and green energy and limit the use of fossil fuels. Another important factor that affects the climate system is land use, and this graph shows the amount of hectares used for grassland for each of the pathways. RCP 8.5 represents an increase in use of grassland, which is mostly driven by an increase in the world population. For RCP 2.6, the use of grassland is relatively constant, which is the result of a shift from more extensive to more intensive farming, while for the intermediate pathways, 4.5 and 6, changes in land use are much stronger implemented with a decline in grassland use. These are three examples of how various factors are taken into account in the development of the Representative Concentration Pathways.

RCP 8.5: illustrates the pathway that we are likely to follow if we continue to do what we do today, the ‘business as usual’ pathway. This means that we won’t take any actions to reduce carbon emission, the world population will continue to grow to about 12 billion by 2100, we will rely heavily on fossil fuels, and continue to use an increasing amount of land for cropland and grassland. It seems to be clear that this is a very unsustainable way forward, but we need to undertake action if we want to make sure the trend follows one of the other pathways.

RCP 6 and 4.5: illustrate intermediate pathways that are based on scenarios in which we apply a range of technologies and strategies to reduce emissions, such as reduced use of grassland and fossil fuels.

RCP 2.6: illustrates a very ambitious pathway in which we reduce the usage of oil, stabilise the growth of the world population, and increase our production of bio-energy. This is the only pathway in which the temperature increase will be limited to a 1.5 degrees increase relative to pre-industrial values, which was the agreed limit in the 2015 United Nations Climate Change Conference that was held in Paris.

So the RCPs give an indication what consequences our actions might have, and they showcase different scenarios with regards to global warming. These are used in combination with General Circulation Models, or Global Climate Models, to predict future climate, thus what temperatures and rainfall values can be expected in particular regions. 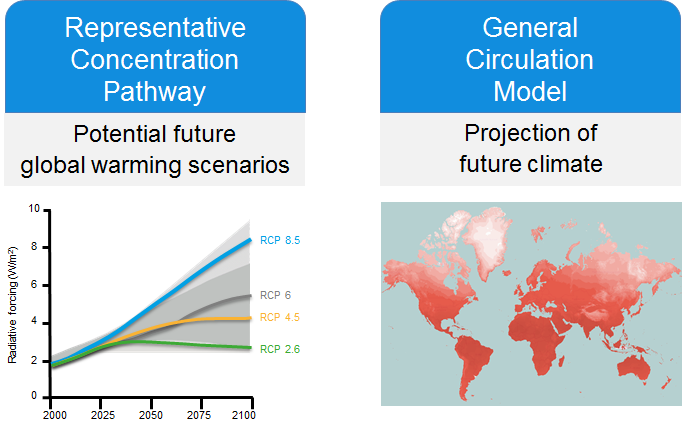 Across the world, there are 27 different research groups, who have constructed one or more general circulation models. Why are there so many different models? Why can't we not just use one? Well, the basic structure of these models is the same, but each of the research groups make different choices about which submodels they include and which of the earth system processes they want to emphasize. This can for example be based on local conditions. Of course these research groups do share their knowledge with each other, and have set up a working group that compares the different models. This is the Coupled Model Intercomparison Project (CMIP), which has been an ongoing project since 1995. When you run a species distribution model and you want to project the results into the future, you have to choose which General Circulation Model you want to use. If you are modelling a species that occurs in a particular country or continent, you can select a model that was developed by the research group in that region. 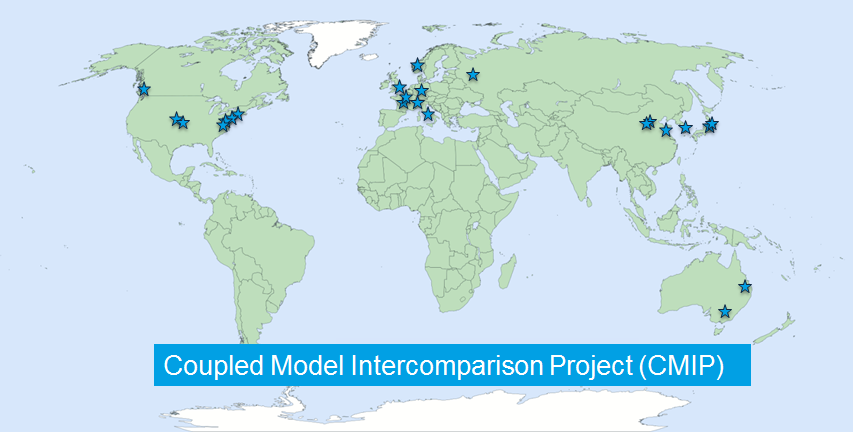 So, for a climate change projection, you need to take into account two things: the Representative Concentration Pathway, and the General Circulation Model, or Global Climate Model that you want to use. 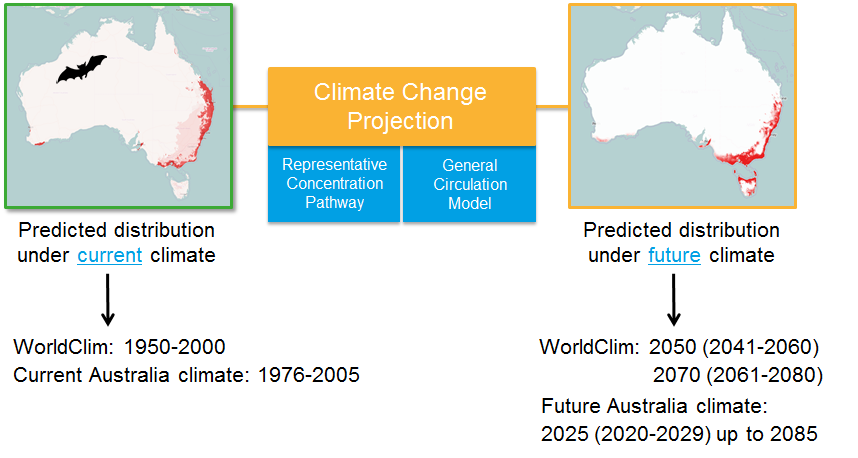 Current climate, usually refers to a recent period of approximately 30 to 50 years. WorldClim data for current climate, for example, is based on climate data measured between 1950 to 2000, whereas the current Australian climate data refers to the period from 1976 to 2005. It is wise to check whether your occurrence data fits the same time frame as the climate data that you are going to use, and if needed, clean the occurrence dataset to eliminate historical records that were collected long before the time frame of the climate data. Future climate data is often indicated by a particular year, but it represents a multi-year average around that particular year. For example, WorldClim provides future climate projections for 2050 and 2070, in which the 2050 projection is the average between the years 2041 and 2060; whereas the 2070 projection refers to the average between 2061 and 2080. The future projection for Australian climate represents 10-year time intervals from 2025 to 2085 in which the projection for 2025 refers to the period of 2020 to 2029, and so on.

The approach of combining species distribution models with climate change projection has been widely applied to a variety of species, and the results are quite alarming. The general pattern that we see is that species are moving higher up in the mountains as areas at lower altitude are warming up, and species are moving towards the poles following colder climates. For example, many species of mountain frogs are affected by climate change as increasing warm and dry conditions reduces suitable habitats. This has already lead to the extinction of this golden toad that lived in the cloud forests in Costa Rica. Research has also shown that over 50% of European butterflies and birds shifted their range up north, some as far as 240 km from their original occurrence sites.

The uncertainties regarding species distribution models under future climate change projections, include:

In conclusion species distribution models are often not used in isolation, but in combination with other models like climate change projections. These combined approaches are very powerful to predict how the distribution of species can be affected by our actions.